Menu
Log in
Register
Install the app
You are using an out of date browser. It may not display this or other websites correctly.
You should upgrade or use an alternative browser.

Anybody who watches BBC or PBS is familiar with David Attenborough should find this sounding familiar.

It's about a new species called the Javelin being introduced to control an invasive species. 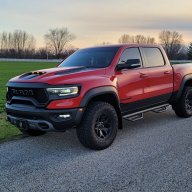 That is some funny stuff lol.
OP
OP
G

dbishop728 said:
That is some funny stuff lol.
Click to expand...

When I was younger and did some work for Uncle, the Russians and their proxy's caused all sort of problems. In the 1940's through the 1990's, if you said some of the things the talking heads are saying now, you might not go to prison, but you definitely would kill your career.

I suppose you've noticed I don't have much use for the Russian government. I've met many Russians through the years and the average Ivan is a pretty decent person. They just deserve a better Government.