Menu
Log in
Register
Install the app
You are using an out of date browser. It may not display this or other websites correctly.
You should upgrade or use an alternative browser.

I am new to the TRX forum. I have been looking for a long time for a new truck and am transitioning out of a 2013 Toyota Sequoia Platinum with 4wd that is still running great and will probably outlive me. I have looked into both the TRX vs the new Gen3 Raptor and have consulted with a number of experienced independent mechanics. They have all recommended the 6.2L Supercharged 8 cylinder RAM with the "Mercedes 8 Speed" transmission vs the 6 cylinder Turbo Ecoboost with the 10 speed "GMC" transmission. I have also talked with a number of people that have transitioned from the Raptor to a TRX all of whom have recommended the TRX.

Last weekend 2 of my friends and I were given the opportunity to drive both the 2022 Gen3 37 Raptor and a 2022 TRX with Level 1 trim. After driving both I can't believe that the two trucks are even considered as being in the same "category" as competitors. There is nothing that compares to the supercharged 702 horsepower of the TRX. The TRX suspension was better tuned to riding on both curving country roads and Interstate I-10 and the TRX's handling/steering made me feel as confident in taking sharp corners at 70mph as I would be in my Porsche Macan Turbo. The "fit and finish" of the TRX cabin was luxurious compared to the plastic in the Raptor. I found that riding in the TRX was comparable to riding in an upscale European sports sedan.

The V6 Raptor, by comparison, was definitely underpowered and I found the 10 speed transmission was sort of always seeking for the correct gear. The Raptor's suspension in sports mode was not supportive as the TRX and it provided little confidence in taking corners at high speeds. Maybe the Raptor is truly "tuned for the Baja" and not for typical daily driving. My impression of both of the vehicles was also confirmed by both of my friends who consider themselves to be and are both "car enthusiasts & collectors". They were both very impressed with the TRX and they were underwhelmed with the Raptor.

I have never owned a TRX or a Raptor and have no "brand loyalty" to either RAM or Ford having not owned a vehicle of either brand for more than 30 years. I will be canceling my order for the Raptor. 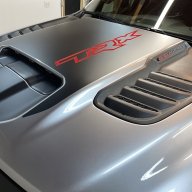 Welcome to the forum. Congrats on the order of the TRX. I looked at the link to your build. That is going to be a nice truck. 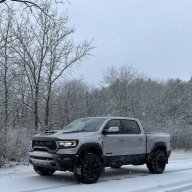 We may be a little biased here but you definitely made the right call. Especially since it’s gonna be cheaper than the Raptor too!
You must log in or register to reply here.

Former Gen 3 Shelby Raptor Owner Who Got The Real Beast-TRX!

New To The Forum TRX On The Way